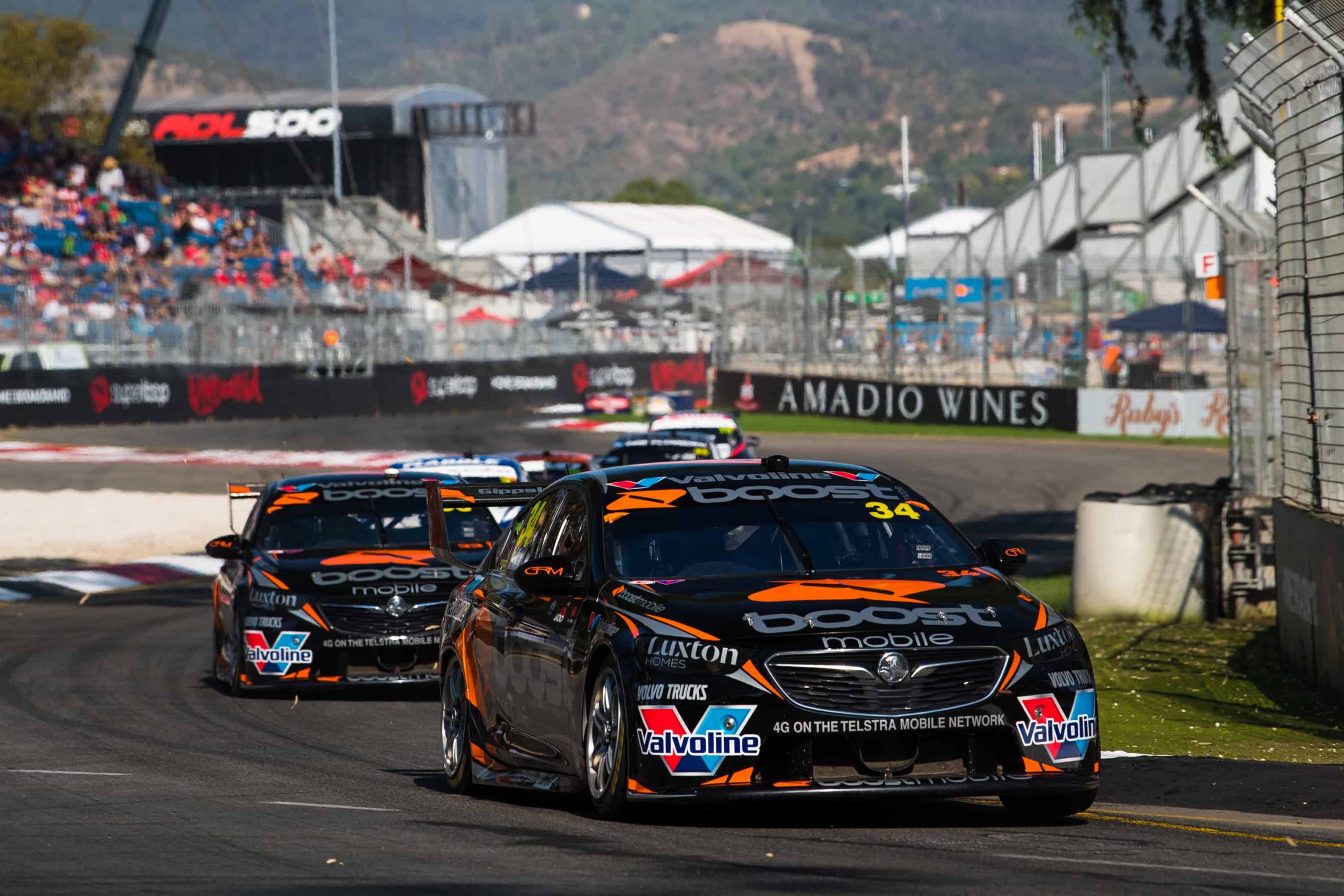 Away we go again! It’s hard to believe but this is the 57th consecutive year that GRM have competed in Australian Motorsport and I still love it!

Since the inception of Supercars in 1997 our focus has predominantly been on that series, but over the years we have competed in Super Touring, Sports Sedans, Production Cars, Formula Ford, Formula Pacific, Auscars and Nascars. I am extremely proud of the fact that of our 35 staff more than half have been with me for more than 10 years and only a handful less than 5 years.

I know that we are making a habit of having very active off seasons and this year was no different. The obvious big change was Garth no longer driving and Richie Stanaway coming in. I appreciate that decisions like this attract emotional responses. Garth is a legend of our sport and I was extremely pleased to have been able to give him an opportunity to return to GRM in 2017. The commitment that I made to him was a guaranteed 2 years of full-time driving and a further 3 years that would include other driving opportunities and a management role in our business. Throughout 2018 I had every intention of Garth driving for us in 2019. With the shock exit of Wilson Security in November we had to find a Naming Rights partner and Peter Adderton and his Boost Mobile brand saw some synergies with GRM. They liked the way we blooded young drivers and they wanted a “young” team. Over the years I have had to make many difficult decisions, but in doing so I have a very simple approach of writing the positives on one side of a page and the negatives on the other. The most difficult part with this decision was the timing and the emotions involved, but my priority had to be the GRM staff.

We are very happy to have Richie join Bieber and we know with two young and relatively inexperienced Supercar drivers that there will certainly be some difficult times to work through and it is in those times when you discover the quality of a person. It’s very easy to be up and about when success is flowing, but it’s how you deal with the tough times that define who you are.

Saying all of that I am very excited that the season is under way.

If there was an award for transporter driver of the year, that is something that our Joey (Joe Sullivan) would take home. Joey is beginning his 49th season in Motorsport and I hope he doesn’t catch me too soon! Joe takes incredible pride in our Volvo Globetrotter FH16 700 and this year has the challenge of maintaining a black truck. Good luck Joey!

The GRM team arrived in Adelaide on Wednesday as we were unveiling our 2019 cars that afternoon. Every year I look forward to seeing our cars and I try and not look too closely at them while they are being prepared in the workshop and prefer to wait until they are fully prepared. As the cover came off one of our cars in the pit garage with lights flashing and music booming I yes yet again very, very proud of what the team had put together.

Of course, looks and presentation of the cars, pit garage and crew are important, but it is on the track action that brings us all back year after year.

The Adelaide 500 is one of the marquee events on the Supercar calendar and although the weather in Adelaide reached 40 deg the fans were not deterred with in excess of 90,000 people attending on Sunday.

Supercar practice began Thursday afternoon and following P1, P2 and P3 James Golding was 13th and Richie Stanaway 23rd. The field was led by Scotty McLaughlin and Fabian Coulthard in the new Mustang.

Qualifying was late Friday afternoon the two Boost Mobile cars were 18th and 19th, this time the #33 of Stanaway  just ahead of the #34. McLaughlin continued where he left off in 2018 at the top of the sheet. As has been the case in Supercars for many years now, it is only tenths of seconds that equate to many grid positions.

After a long day at the track on Friday and my 70 plus year old legs feeling the effects of 12 hours of standing on concrete and my thirst feeling the effect of the 40 degre temperature the thought of the walk back to our hotel, although only a couple of kilometres seemed daunting. Barry came to the rescue as he rushed up to me with an electric scooter (stand up type). It would be roughly 65 years since I stood on a scooter, but away I went, and I had a cold beer ordered and waiting for Barry when he came in dripping in sweat. I might have to get myself a scooter!

Saturday saw the scheduling of the first 78 lap (250km) race late in the day and again with 40 degree temperatures this helped marginally. Starting 18th and 19th is always fraught with danger as the pack in front navigate the opening laps through the narrow and unforgiving streets of Adelaide. Thankfully the field settled, and all cars remained unscathed.

The race required a minimum fuel drop of 140 litres over two stops and each team had 7 sets of tyres per car in total for the Saturday and Sunday race. This left the option to run an extra set either day if a late Safety Car period occurred and track position dictated this as an option. That is if you have a car back in the field and a SC period occurs with say 10-15 laps to go those that have what they believe good track position will stay out to protect that position, but those further back in the field will pit hoping that the new tyres will help them progress through the pack on a restart.

Saturday’s race ran green all the way and except for the cool box failure on Cameron Waters’ Mustang the race was uneventful. James Golding did a very good job and although he lost two positions in the closing laps as he began to experience leg cramps, he finished 14th. Richie finished where he started in 18th.

Although the Sunday qualifying showed no improvement on the starting order except that Golding was 18th and Stanaway 19th we did close the gap by several tenths to the lead cars with only 6/10ths of a second separating pole form 18th. Scotty Mac got pole from Shane Van Gisbergen.

Race time and again 250km (78 laps) around the Adelaide Parklands circuit and McLaughlin in his Mustang was matched off the start line with Van Gisbergan and his Holden, but with the inside line to turn 1 Scotty led and although Van Gisbergan , one of the best on cold tyres pressed hard he could only watch on as the Mustang disappeared down the track with a one second lead after lap 1. Again, Scotty did a tremendous job to lead from start to finish for the second day in a row. Cam Waters (Tickford) recovered extremely well from a disappointing day on Saturday to also outpace the 888 car of Van Gisbergen to finish 3rd.

Golding drove very well and was an unfortunate recipient of being the last car on used tyres (10 laps old) when the SC was deployed on lap 27 and we chose to leave him out thinking the degradation would not have been too severe and he should be able to defend. On the restart he was muscled wide and into the marbles (rubber off the tyres that gathers beside the racing line) and his grip was severely hampered and before he knew it he had gone from 5th to 15th and as the race unfolded he came home 19th.

Richie also was racing well and showing much improved speed and had worked his way inside the top 10 when at his last stop he had to incur a 5 second penalty for an indiscretion on lap 1. On the opening lap Richie was on the inside of Courtney (WAU) yet marginally behind as they approached turn 8. The rules are whoever is in front at the 150m marker at turn 8 must be allowed to enter the corner first. Richie, although on the inside did not yield and allow Courtney the corner. This rule is in place at turn 8 as they cars enter and corner it in excess of 200kmh and it is far too dangerous to have two cars side by side. Richie finished 19th.

Also, to the GRM Super 2 Team very, very well done. Mason Barbera earning his first ever Super 2 pole and in a tremendously exciting manner on the very last lap of qualifying and finishing the weekend 4th and first year driver Dylan O’Keeffe qualifying 7th and finishing the weekend in the same position. Both boys drove extremely well and showed that we have some very good talent coming through.

I can’t wait for the GP!