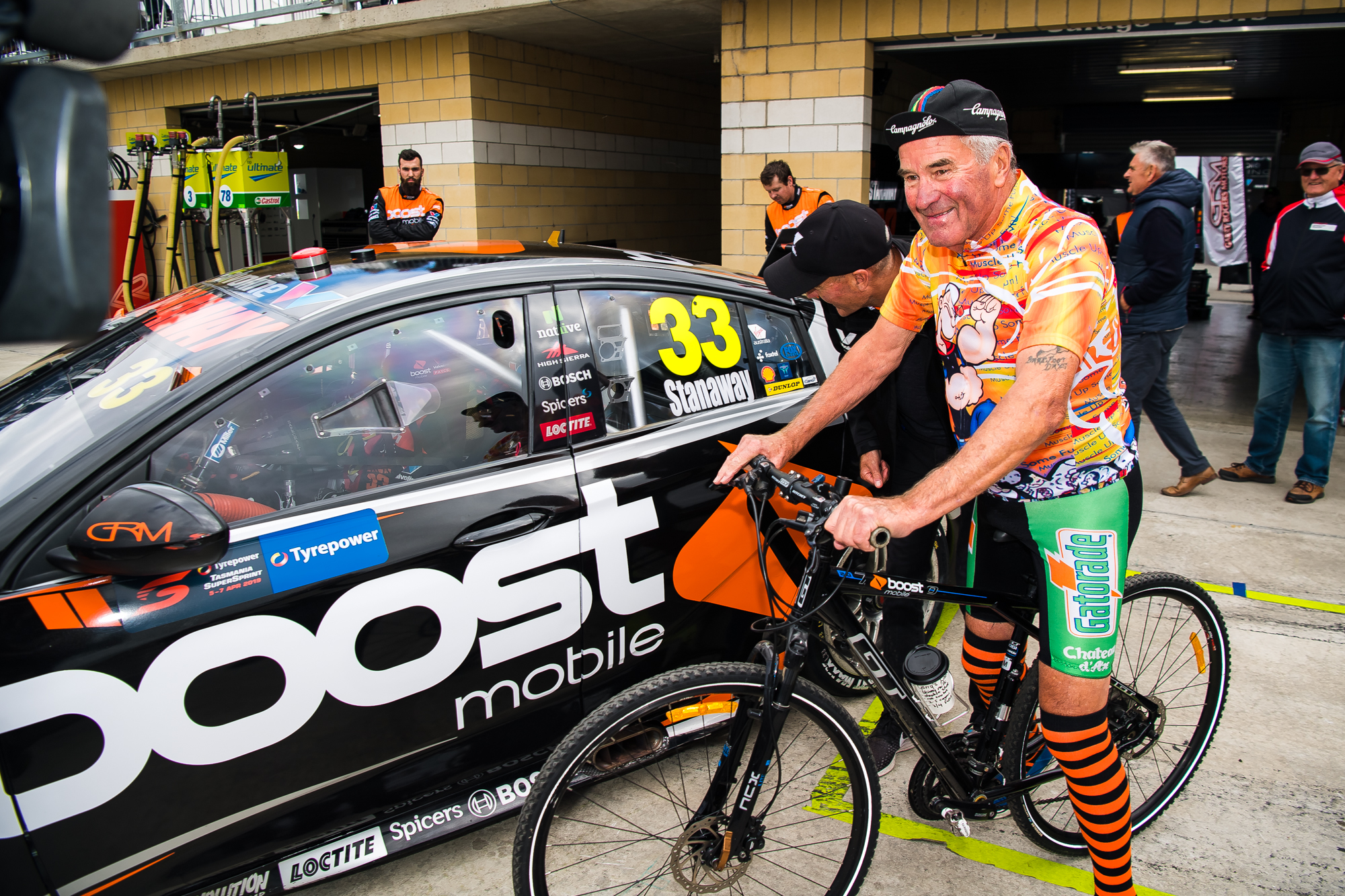 Tasmania is a place that holds many frond memories for me. As a young child I clearly remember the tremendous adventure of being put on a plane at Essendon airport and flying to Wynyard (north west Tasmania) to spend my school holidays with my cousins and auntie and uncles. We got up to all sorts of mischief and it is probably where my interest in machinery began as we played on tractors and bulldozers. It is a place where I met the first girl, I had a crush on in the local store at Sulphur Creek, Robyn Spiken. Sixty-five years later and I still look forward to travelling to Tassie.

There are few crowds that are more passionate and knowledgeable in Australia than the Tasmanian crowds. They truly love and understand Motorsport and the Symmons Plains track provides the perfect amphitheatre to watch Motor Racing.

Joey headed off on Tuesday from the workshop and travelled overnight on the Toll boat to Burnie, arriving Wednesday morning. Joe then drove over to Launceston and with the help of the team at Webster Trucks washed the Volvo Globetrotter and trailers. I know that I am biased but there is nobody in pit lane that cares and maintains their truck and trailers better than Joey. Thank you!

I recently updated my phone and being an analogue man, I have been having quite a few teething problems with my new handset. Of course, I blame the phone but the younger members of GRM seem to be indicating politely that it may be the user. Anyway, for the first time I can remember I slept in, the alarm on my phone did not go off! I rang Barry and told him to head to the airport as we normally travel together, and I would do my best to make the flight. Thankfully it was a reasonable Melbourne traffic day and I arrived just in time for our flight. I explained to Barry what happened with the alarm on my new phone and he pointed 0ut that I hadn’t turned it on. I don’t believe him! I want my old phone back!!

As we coasted over the northern coastline I admired at the beauty of our wonderful country and although the racing has been very tough for us this year and we have had to make some very tough and emotional decisions, I took the moment to appreciate how fortunate we are to do what we do.

The Tasmania was the first Sprint round of the year that incorporates a 120km (50 lap) Saturday race and 200km (84 lap) Sunday race. Each of these two races have individual qualifying and for the first time the cars are placed in parc ferme following qualifying and apart from checking and adjusting tyre pressures and giving the car a wipe over nothing else can be done. My initial though was this trial was successful.

The Symmons Plains Raceway is located approximately 20 minutes south of Launceston in a paddock on the side of the highway. Sounds very agricultural, I know and so it should because it was initially built by a farmer for his sons back in the 1960’s to teach them to drive.

Today, it is one of the best racing circuits in Australia to watch Supercars and yet again there was an excellent crowd that attended over the weekend with nearly 55,000 people there to watch the Supercars.

Friday’s track activity involved 2 x 30-minute practice sessions. The second of these sessions is particularly important as the Top 10 skip Q1 on Saturday and go straight to Q2. This type of knockout qualifying was introduced to minimise the number of cars on track during qualifying and in my opinion does add further interest and pressure in Friday practice. Unfortunately, neither Biebs or Richie were able to make the Top10 and to be honest our speed was very disappointing being 7-8/10ths off the lead cars.

Friday night and Barry and I were thankful to enjoy a beautiful home cooked roast from our good friend in Tassie, Greg Crick. Greg’s heritage is long and colourful being a descendant from one of Captain Cook’s personal chefs who happened to befriend a female convict on the journey to Van Diemen’s Land and the Australian Crick clan were established. Unfortunately, Greg didn’t inherit the exact cooking abilities of his ancestors and as he battled trying to thicken the gravy I had to jump in and give him a hand!

Saturday morning and a final practice session before the knockout qualifying began. Both Richie and Bieber had shown glimpses of speed throughout practice but there was certainly no consistency and at such a short and fast circuit the smallest of mistakes can cost 10 plus grid positions. Following qualifying Richie was 17th and Jimmy 19th and although these starting positions are nothing to get excited about, it was encouraging that the gap to pole was a little over 4/10ths of a second. In a tremendous qualifying effort, it was fantastic to see Frosty (Mark Winterbottom) still has the speed to match the younger guys coming through and he snatched pole from Scotty McLaughlin by a mere 4/1000ths sec.

The 120km race required one compulsory pit stop and we stopped #33 on lap 18 and #34 a lap later. Both cars were battling with the Nissan of Rick Kelly and the Mustang of Holdsworth and eventually came home 15th (Bieb’s) and 16 (Richie). The race was a DJR 1-2 with Scotty leading from the first lap to win from Coulthard and Van Gisbergen 4th. It is important to look for positives as much as it is to face the facts of your result. It was pleasing to see that Bieber had race pace that was inside the top 10.

To be totally frank Saturday was a very disappointing day and as much as it is vital to maintain the morale of the entire Team, it is also important that everybody is aware that we don’t accept these types of results. I’ve said it many times, Motorsport is a Team game and as much as it is easy to say, “the driver this, the driver that”, to move forward requires effort and the right attitude from everybody. I have enormous faith in my people, and I know that if we all stay strong and work hard together that tomorrow will be a better day.

Sunday and the weather gods weren’t as enthusiastic with a cold wind and light rain falling at times. I had planned a little stunt if we could produce a reasonable qualifying result and as most know I love a “dress up” so I was praying that the boys could produce something special.

Stiffy (Stefan Millard – Team Manager) has certainly borne the brunt of my frustration in the early stages of the season, but he is a very special person. Stiffy has worked tirelessly with the entire GRM crew and he must work with the “hand” that I have dealt him. Stiffy’s manner and never give up attitude and ability to press on regardless are exceptional qualities and I am tremendously proud in how he goes about his job.

In qualifying neither Bieb’s nor Richie made the Top 10 in P3, so they had to go straight in to Q1 where the top 5 (out of 14) progress to Q2, Richie was second fastest so made it through, Bieb’s missed by a couple of tenths. Richie was on a roll and made it through Q2 to the final 10 where again he showed us all something that we knew he had and qualified 7th just over 2/10ths off the pole time of Van Gisbergen.

Unfortunately, this positive qualifying result didn’t equate in to the finishing result that we desired and there were factors some of which outside the control of the driver that influenced the finishing result of 19th for Richie with Bieb’s a further 3 positions further forward in 16th. Van Gisbergen won from Coulthard (DJR Penske) and Dave Reynolds (Erebus) drove extremely well for 3rd.

The big positive was the qualifying position inspired me to put on some lycra and take a little ride through the grid with my café latte which was a follow up from my comments in the previous race report from the Australian Grand Prix.

Following the races Barry and I had to head off to Hobart for some business on the Monday and as we travelled through the countryside my mind wandered off to when I was a young boy running through the paddocks of my auntie and uncles farm. Not a care in the world!

I can’t wait for Phillip Island!