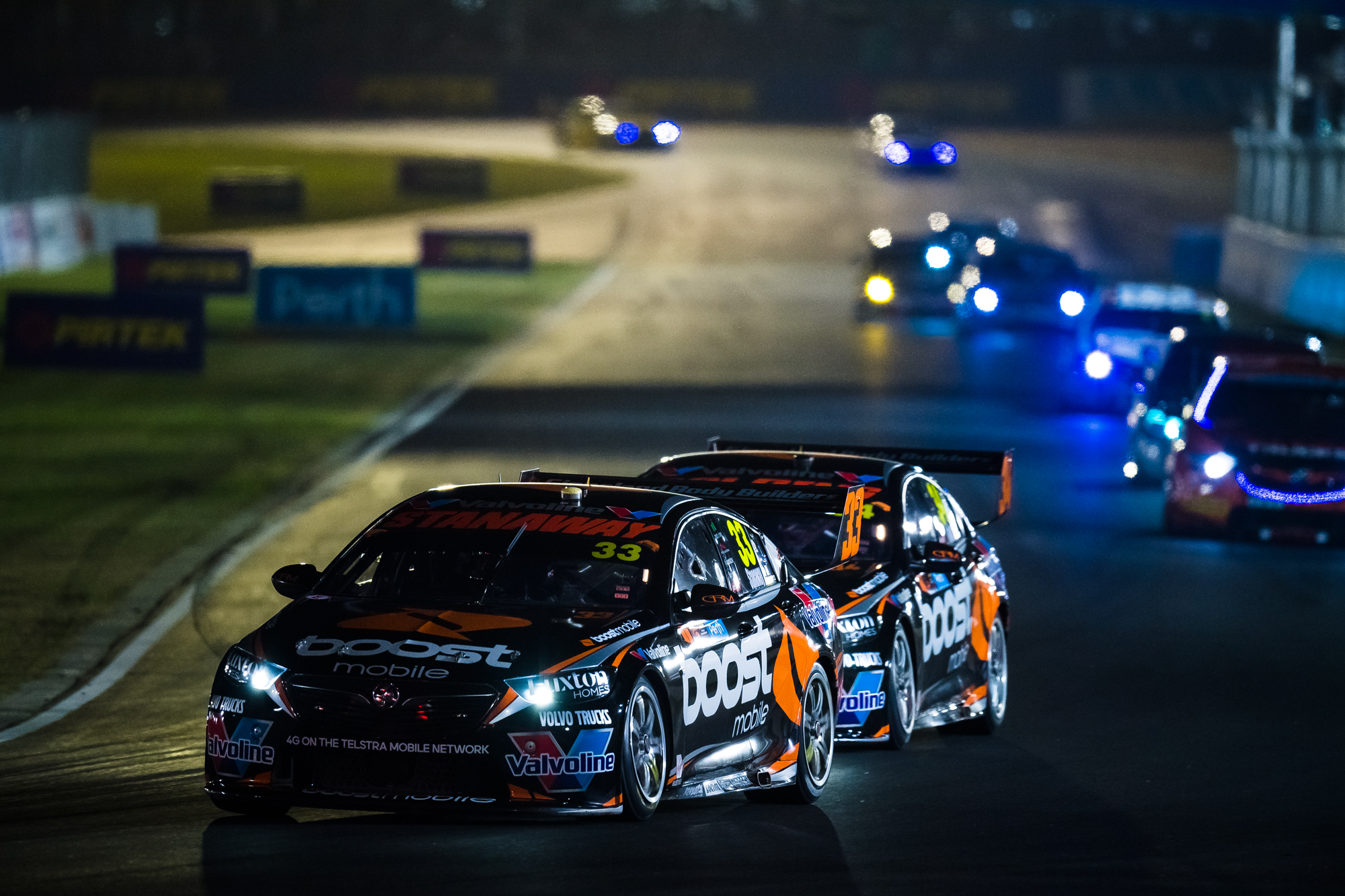 The long haul to Perth is seen as a tedious and arduous journey by many, but not for Joey (GRM Transporter driver). Joey looks forward to this trip as much as a child looks forward to Christmas time as he gets to travel over 4,000 km’s in the cabin of the Volvo Globetrotter FH16 700hp truck and spend four nights sleeping like a baby in the sleeper. It doesn’t get any better for Joey!

The Perth round also required our Super2 transporter to make the trip and although “only” a Volvo Globetrotter FH16 600hp the performance and fuel economy were exceptional, and we were very lucky to have an experienced driver join Joe on the trip. Kevin Stone and his wife Deb from Bordertown kindly offered to help us when they became aware that we didn’t have a driver able to take our transporter over to Perth. I feel tremendously proud that we have such a loyal following and people are prepared to take time off from their own work and time with family to help our Race Team out. Thank you very much Deb and Kev!

The Perth round was the second time in recent years that we raced at night. Perth certainly turned on the weather with lovely clear sunny days and crisp clear nights and as we stay at Hillarys on the coast north of Perth I managed to walk down to the beach and dip my toe in water. These days I am only game to put my toe in and it’s not because of the sharks, but because the time it would take me to stand up if a wave knocked me over would be longer than I could hold my breath for.

The Barbagallo circuit has long been referred to as the “cheese grater” by drivers and teams because of the abrasive nature of the surface. But, for the first time in more than 10 years the track has been resurfaced and this provided some unknowns regarding tyre performance and durability. Practice 1 on Thursday evening illustrated very quickly that the track was fast with all 25 cars breaking the existing lap record. James and Richie were 8/10ths off the pacesetter, Jamie Whincup but were two of only a handful that did not run green (new) tyres.

The qualifying format at Barbagallo was that of a Sprint Round and practice 2 on Friday saw the top 10 progress through to Q2 while the other 15 would have to participate and try and advance from Q1. Scotty McLaughlin was again at his best leading the field following P2 with 4 of the top 5 spots the “de-spec’d” Ford Mustang. Both Bieb’s and Richie had to take part in Q1. Richie produced a very competitive time immediately with a 53.4 and advanced to Q2 and Bieber missed by1/10th of a second and had to settle for 17th. In Q2 Richie was unable to replicate the lap he had done only minutes earlier and was 15th. DJR Penske dominated with Scotty and Coulthard filling the front row.

Although the track had been resurfaced there was evidence of tyre degradation greater than what would normally be expected on such a surface. Tyre degradation can make for interesting racing as if managed well by the driver it can allow for overtaking late in a race when others are falling back. But, if early on in a stint a driver must battle those around them it is very difficult to manage the tyre wear. The great drivers have the ability to both defend and attack while still being mindful of the impact of their driving style on their tyres.

The lead up to both the Friday and Saturday night races was sensational with fireworks, flashing lights, smoke machines, music and the roar of the V8’s as one by one they exited pitlane. This was a real show and that is what entertainment is all about.

Unfortunately, when it came to the racing, we had very mixed results, yet again with some positives to work on. Stanaway was impacted in both the Friday and Saturday races from incidents and occurrences outside of his control. In the 120km. (50 lap) Friday race he was struck from behind by Bieber at turn 6 in the early laps which sent him in to the sand and to the rear of the field. Richie pressed on to finish 22nd. And on Saturday after yet again some early race niggle amongst the teammates, Richie had a radio failure and with the visibility of the pit board been affected by the glare of the lights the #33 entered pit lane during a window that had been discussed pre-race yet as the race unfolded it was still several laps before Krusty (Richard Hollway – Engineer) was going to call him in. This resulted in an additional stop for Richie and put him a lap down. Again, he battled on as well as could be expected and finished 21st.

Bieb’s although struggled in qualifying produced his most consistent weekend for the season with top 15 finishes in both races with a 14th and 13th and yet still could have been better but for an incident with Winterbottom as he was pitting on lap 45. The pit lane entry is  immediately on the right hand side of the track as the cars exit the final turn (7) and with Winterbottom shadowing him, Bieb’s thought it best not to indicate that he was entering the lane as it may have suggested to Frosty to pass him on the inside. As the #34 headed right on the exit of turn 7 Winterbottom made contact putting the car in a high–speed spin but fortunately not making any contact with the pit wall and ending on the grass at pit entry. I’m sure Bieber headed straight to the dry cleaners on Saturday night!

The 34 completed the stop and four laps later the Safety Car was deployed following an incident at Turn 7 with Heimgartner (Kelly Racing) and Pye (WAU) locking front wheels and leaving Pye stranded. On the restart Bieb’s was 14th having lost several places following the pit lane entry incident and raced home to finish 13th doing well to manage his tyres as others around him had fresher rubber.

Again, a tough and trying weekend for GRM yet I am pleased by the positive attitude and continued enthusiasm of all of our girls and boys and one thing I do know is if you keep on trying, getting up early and working hard that you will get there. I know that I am getting on and time is running out, but I can assure all of you I never give up in life!

MOMENT OF EXCITEMENT​–​this may not sound exciting, but I was very excited (maybe happy) as I left the circuit on Saturday night and followed down the road a Jaguar Mark 1 that had raced earlier in the day and I was even more excited as Barry and I passed the Jag and spotted the drivers illustrious moustache!

MOMENT OF DISAPPOINTMENT​–​I’ll save that for the dry cleaner who takes care of Bieber.

I can’t wait for Winton!