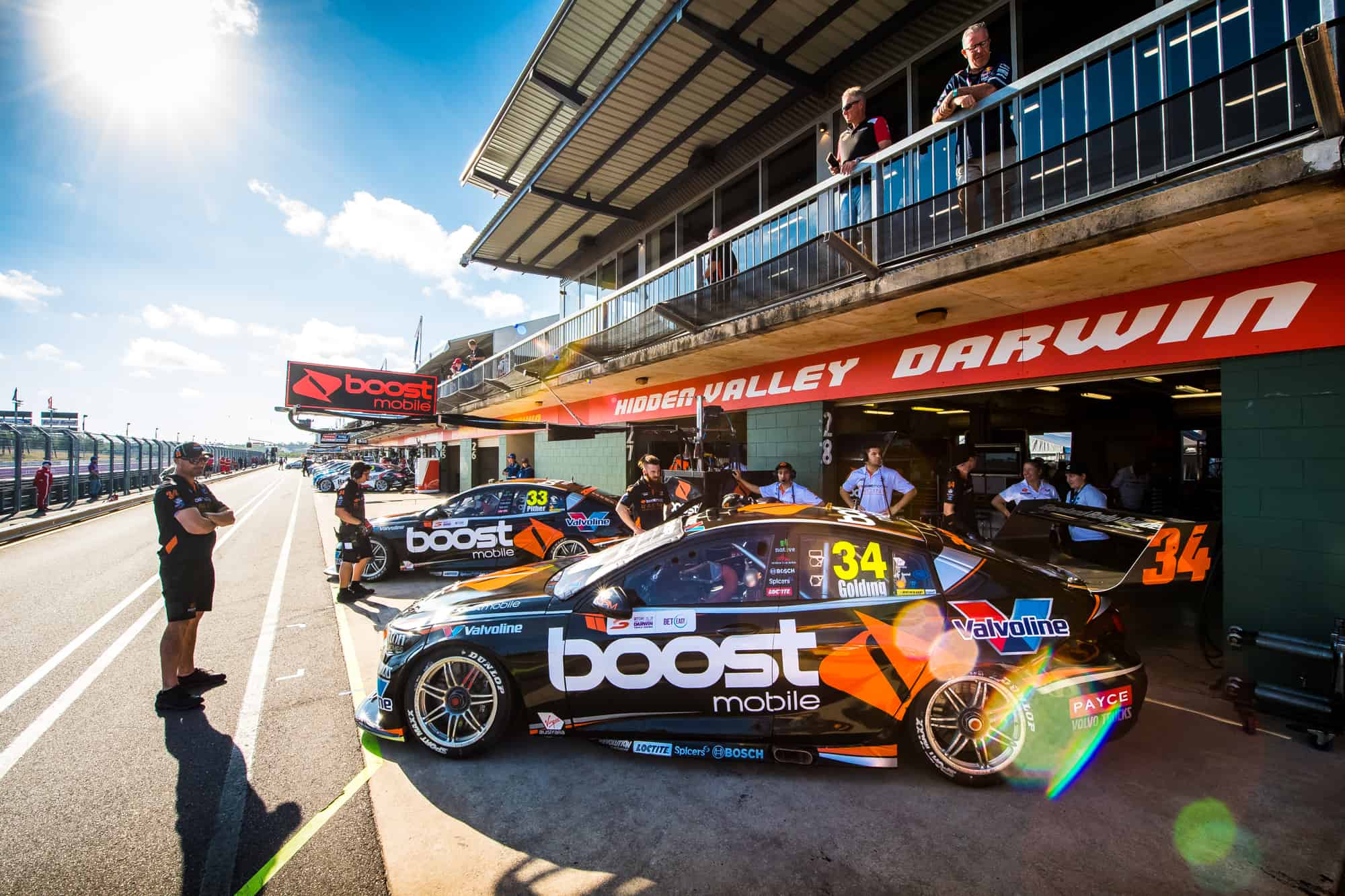 The annual trip to the top end is one of the most anticipated events on the Supercar calendar, and this anticipation is mainly centred around the drivers. When I say “drivers” I am referring to the truck drivers not the race car drivers.

Any “truckie” worth his or her salt relishes a near 4,000km adventure that takes them from the south to the north across one of the most diverse landscapes in the world. Joey (Joe Sullivan – GRM transporter driver) has completed every one of these trips since the inaugural event back in 1998. Joe just loves this trip and is so proud of his Volvo FH16 700hp truck, b-double trailers and precious cargo. He always likes to leave on the Friday evening the week before the event so as he has time up his sleeve in case of any mishaps, but also so he can spend time with interested onlookers at truck stops along his journey. Joey is a tremendous ambassador for both GRM and Supercars. Thank you, Joey!

Joe’s trip didn’t quite start as he hoped with a tyre blowout on one of the inner tyres on the rear trailer as he drove out of the GRM workshop on Friday evening delaying him a couple of hours, but much better than in the middle of the desert. The trip north does have its risks, particularly roaming wildlife. Joe encountered buffalo, cows, emus, large eagles feeding on roadkill, snakes and The annual trip to the top end is one of the most anticipated events on the Supercar calendar, and this anticipation is mainly centred around the drivers. When I say “drivers” I am referring to the truck drivers not the race car drivers.

Wednesday, Joe spends much of the day cleaning the truck and trailers in preparation for the parade through the streets of Darwin that evening. At several events the trucks and trailers do street parades, but the move to early evening for the Darwin parade is certainly spectacular with the lights and chrome shining.

The Darwin event is supported tremendously by the local community. The Hidden Valley race circuit is about a 15-minute drive from the CBD and a plethora of buses are provided to ferry fans back and forth which appears to work well. The circuit itself is a little under 3kms in length with the main straight being 1.1kms. For fans the view of the circuit is excellent from most viewing areas. As the name suggests “Valley”, the circuit is in a valley and has an amphitheatre feel to it.

The on-track activity began on Friday. Of course, the Supercars are the “main” event, but the Darwin motor racing fraternity is thriving and every year we enjoy seeing the locals go at it in their improved production class and the good old Holden HQ’s. Watching this racing and talking to these people inspires me. Many of these people have little backing and it is often a group of mates or a family who all chip in to go racing and gee they have fun!

At the last round in Winton (Vic), Chris Pither had to replace Richie Stanaway for the Sunday race following the recurrence of a neck/disc problem that troubles Richie on occasion. Since Winton, Richie had been having treatment and things were improving until he had a setback the weekend before Darwin. Following discussions with Supercars medico, Dr. Carl it was decided that it was in the best interests of Richie’s physical wellbeing that he should not race in Darwin. For Richie this was not easy to accept, as every professional sportsperson wants to ply their trade and after a difficult season so far, Richie is determined to turn things around.

The positive is Chris gets to spend a whole weekend in the car, which come enduro time of the season will be beneficial. Following Friday practice Chris and James were a little over a second off the pacesetter, Mclaughlin in 23rd and 25th. Qualifying on Saturday and James Golding closed that gap to 7/10ths, yet was still back in 19th, Chris was 24th. Again, it was McLaughlin at the top of the time sheet from Dave Reynolds (Erebus).

Friday night and it was the family challenge in the AFL with my Adelaide Crows playing Barry’s Richmond Tigers. It all started well for Barry as the Tigers led at halftime and we sat on the couch eating a Violet Crumble, but the spring in his step soon came to a halt as my Mighty Crows destroyed the Tigers in the final term, Barry was gone!

As per the Sprint Round format, the Saturday race is 120km with one compulsory stop for tyres. McLaughlin led as the lights went out, but further back in the pack as the cars exited turn 1 Bieber, Macauley Jones and Jack LeBrocq tangled and this ended the day for the #34 with front end damage that could not be fixed in time to complete the required 75% race distance. Chris Pither raced well, stayed out of trouble and came home 15th. Scotty McLaughlin continued his rich vein of form and won from Chaz Mostert (Tickford) with Dave Reynolds third.

The highlight on Saturday was Dom’s (GRM chef) roast pork with apple sauce, crackling and various salads. Beautiful Dommie, I’m salivating as I write this report!

After leaving the track on Saturday Barry and I dropped past the Darwin Sailing Club for a quick beer and catch up with some friends that we have made over the years. To those that haven’t been to Darwin I can assure you that the long trip is worth it just to watch the sun go down and to see the colours that are ignited into the early evening sky.

Sunday and yet another beautiful clear 31deg sunny day. June in Darwin is paradise!

I was a little slower out of the blocks than Barry on Sunday and he had started walking to the Hidden Valley circuit asking me to pick him up along the way. As I drove along and spotted him in the distance walking along it did cross my mind to keep driving. But, being the kind and caring father that I am I did stop and off to the track we went.

Qualifying on Sunday was again dominated by McLaughlin and his Mustang. Chris was 19th and Bieber 22nd. I know that I often illustrate what a tenth or two means, but 3/10ths would have improved Chris 14 places to P5. Scotty went on to claim pole in an exhilarating shootout lap that gave him the second leg of the Triple Crown.

Race 16 of the Championship and the fans walked amongst the teams and cars as they lined up on the grid. The colour and excitement of this moment always makes me feel so proud of what we have achieved as a sport over the past 23 years and as usual the flyover of the jet had me ducking for cover. I never seem to see the jet coming!

Race 16 of the Championship was a 70 lap 200km race requiring a minimum of 2 pit stops for tyres and 120 litres of fuel.

In the #34 Bieber got away well and was 17th by the end of then opening lap. Chris didn’t fair quite so well and had dropped to 23rd following a poor jump off the start line. Out front McLaughlin withstood a first lap challenge by Reynolds and went about building a lead. By lap 6 and sitting 16th, Bieber was in a “888” sandwich with Van Gisbergen in front and Whincup pressuring from behind. The 888 cars stopped on lap 12 (#97) and 14 (#88) respectively and “short filled” their cars. Short filling relates to the amount of fuel put in at the stop and with the 120litre requirement normal procedure is to divide this in two 16-sec stops or thereabouts. The 888-crew appeared to put approximately 8 seconds of fuel in which allowed both Van Gisbergen and Whincup to leapfrog their way up the order as the field pitted in the following laps.

This approach works well if you are quick as it allows the driver to race with others in the lead group, which will assist in gaining positions later in the race, so long as their second stops are not affected by a Safety Car period. This paid off for 888 with Whincup doing the longest final stint as he was the first to stop for the second compulsory stop on lap 34 and raced very well, maintaining his tyre wear over the 36-lap stint to finish 5th. Bieber was called in on lap 36 while in 15th, eventually finishing 17th. Chris’ final stop was one of the last in the field on lap 47 as Krusty (Engineer) hoped for a Safety Car, the #33 eventually finishing 23rd.

Yet again it was Scotty Mac who ruled out front and at the 21st year of the Darwin event, he became the first driver in the history of the event to come home with the Triple Crown (two race wins and Top 10 shootout pole). Well done Scott. Also, a big pat on the back to Dave Reynolds and the Erebus team with another P2 result.

With a flight home on Sunday night I recommended to Barry that we whip back to our hotel and see if we could have a quick swim to freshen up before heading to the airport. This was a great idea and well accepted by the hotel staff, yet I then remembered I didn’t have any bathers and as I don’t wear undies that wasn’t an option. Barry came to the rescue and handed me a pair of his undies and although a little tight, I certainly enjoyed the swim. Apologies to those others that were I the pool!

I can’t wait for Townsville!!

MOMENT OF DISAPPOINTMENT – getting off the plane at 2.00am Monday morning.
MOMENT OF EXCITEMENT – being able to squeeze into Barry’s undies, I’m still an athlete