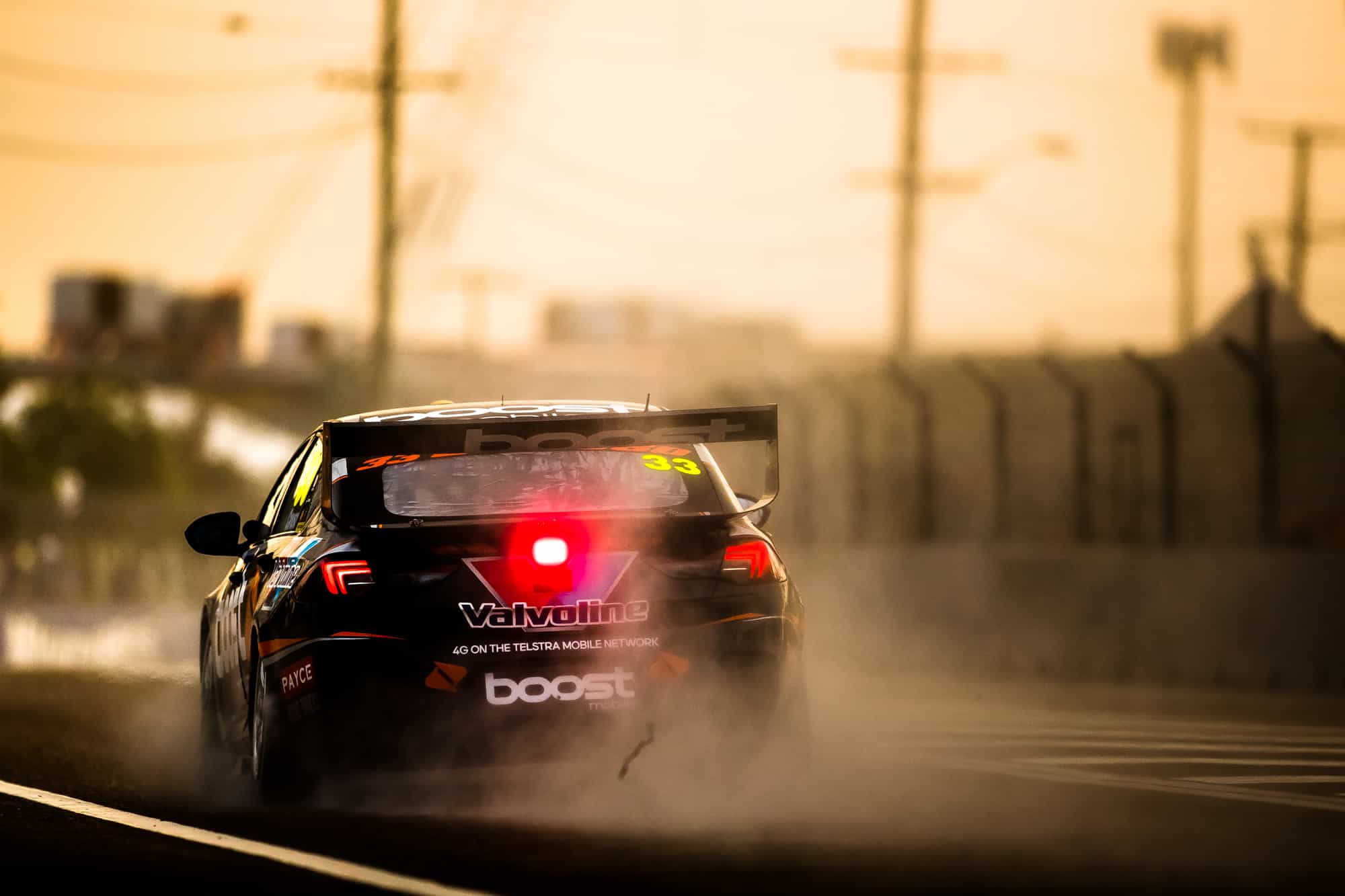 Although we (race teams) all most likely rank Bathurst as the event we most look forward to on the Supercar calendar. There are others and Townsville is one that us southerners certainly have highlighted on the calendar. Joey (Joe Sullivan – transporter driver) although a Bathurst tragic and having attended more Bathurst 1000’s than myself tends to these days rank his favourite events on how long he gets to spend behind the wheel of the Volvo Globetrotter FH16 700, hence Townsville is number 3 on his list (behind Darwin and Perth).

The Townsville 400 is an event that the city of Townsville and all associated with the event should be tremendously proud of and with the floods having impacted in a major way earlier this year, the presentation of the city and surrounding areas was first class. Arriving on Wednesday I spent the afternoon walking around and enjoying the warm northern sunshine and picturesque outlook along the coastline.

Wednesday evening and Dom (GRM- chef) put a BBQ on for the crew in the grounds of the apartments where we stay. The guys and girls played tennis and in between flipping his burgers, Dom showed a dynamic and competitive streak which was quite a contrast to his “easy going” nature when in the kitchen and retained his number 1 ranking within the GRM team.

Unfortunately, Richie’s neck injury had not recovered to the level required to withstand the g-forces of Supercar racing and we welcomed back Robbo (Michael Caruso) to GRM. Credit must be given to Chris Pither for his efforts in completing the Winton round when Richie had to withdraw mid-round and again at very late notice driving the #33 at Darwin in the last round. Chris is a very important member of GRM and along with his endurance driving duties, he drives a Renault TCR car for GRM and is a senior member of our Super2 program. Outside of these duties Chris is involved with drive programs with several manufacturers and we are very thankful for the time that he can dedicate to the team. Motorsport often attracts “individuals” and Chris is far from this, he is one of the most team orientated, hard working and down to earth people that I have had work with our team in its 50 plus year history. Thank you.

On the Monday leading up to the Townsville round, Barry had me trooping around a building site and as a result of my exuberance to enter the builder’s hut to escape the rain I tripped and went down for the count. I was pleased to get to Townsville and on Thursday Dr. Carl (Carl Le – Supercars doctor) put a “magic” band-aid the size of a dinner plate on my ribs that was supposed to provide some relief. I’m no wimp, by Saturday I was advised it would be best to head home and rest.

Although I very rarely miss a race, it is certainly a different perspective watching live on television. I am tremendously proud of the Supercar telecast; it is truly one of the best live telecasts of Motorsport in the world.

Our inability to qualify well is certainly something that has hampered our performance majorly throughout the season and again in Townsville this was the case. As with Chris Pither a lot could not be expected straight up from Robbo. It has been 7 years since he drove for GRM and a lot has changed in that period, including Robbo spending 6 of those years in a Nissan. Krusty (Richard Hollway – ENG #33) worked hard together over the weekend, yet qualifying speed was not there.

With both the #33 and #34 cars starting well back for race 17 of the Championship, the first 200klm (70 lap) leg James Golding did a very solid and commendable job to finish 15th, Robbo was further back in 22nd. Again, it was Scott McLaughlin who came out on top although Dave Reynolds (Erebus) certainly did his best leading from the start and it took a pit-stop mishap to for him to lose the lead and eventually finish 6th. Jamie Whincup and Chaz Mostert were 2rd and 3rd respectively.

Although finishing 15th is not what anybody aims for, Bieber and the #34 crew led by Lewis (Manuel Sanchez – ENG #34) did a really good job to get back to 15th after being sent to rear of the field by Macauley Jones (BJR) on the second lap.

Saturday night and I missed the chat that Barry and I normally have while lying in bed (separate beds, on most occasions!) where he normally nods off while I’m still waffling away. But it was good to be home with Kaye (same bed!), where I nod off, while she waffles away.

Sunday and starting to feel better I fired up the old Fergy (Massey Ferguson tractor), hooked on the harrows and took to the paddocks. It is not often that I get to spend time around home, and it was very relaxing listening to the purr of the tractor and rattling of the harrows as I went from paddock to paddock.

Thankfully I missed qualifying as there was very little improvement from the previous day, yet Bieber did show some improved speed in the #34. McLaughlin earned yet another pole, closely followed by Reynolds and with a brilliant effort by Matt Stone Motorsport, Todd Hazelwood qualified 3rd.

As the race approached the chance of rain seemed a real possibility and although some light sprinkles of moisture began prior to the race start, it was not damp enough for wet weather tyres. The tyres used when it is wet have grooves cut in them that allow the water to escape from under the tyre, but they are much less grip on a dry track and wear incredibly quickly on a dry track.

From the start the action began as the track conditions were unpredictable with the surface now lightly covered in moisture. Dave Reynolds and Scotty Mac came together while fighting at the front enabling Cam Waters (Tickford) to make a break, the result was the #9 and #17 headed to the pits. Bieb’s and Robbo both made good starts and avoided the mayhem in front. Lap 20 and Jamie Whincup made a very rare mistake while pushing hard and hit the wall which resulted in his car stopping on the circuit and the Safety Car was deployed. The SC triggered mayhem in pit lane as most of the field pitted. With Bieb’s just in front of Robbo he pitted first with Robbo having to queue. The washup following this period was the DJR car of Coulthard led with Bieb’s in 13th and Robbo 18th. Krusty chose to pit the #33 twice under the SC as the race required a minimum of 140 litres of fuel be put in the car and as Robbo would not lose that much track position by stopping twice it was worth squeezing as much fuel in as possible as this could help later in the race. On lap 30 the rain had turned into a tropical downpour and again pitlane was a hive of activity. On these occasions when cars, wheels and people are going everywhere and with the pit box slippery the crew need to be incredibly focused. Many made mistakes that were costly to the end result for their respective cars, but Stiffy (Stefan Millard – Team Mgr.) kept a cool head, relaxed the boys over the radio and had them focus on exactly what they had to do as again the #33 and #34 came in on after the other.

By lap 35 Bieb’s was in the top 10 in 9th and Robbo 13th after again having to queue behind the #33. The earlier decision to put extra fuel in the #34 car and the ability to get the remainder of the required fuel drop in the #34 car on lap 30 paid dividends as the race progressed and several cars that had not met the minimum fuel drop stopped. One of these cars was the BJR car of Nick Percat that erupted in a fireball as fuel from a split fuel line spilled over the car and pit box. Fire crews and team personnel from various teams acted swiftly and serious personal or material damage was avoided. With only 3 laps to go and the Percat car stranded in pit lane the race was finished under the SC. The King of wet weather driving, Van Gisbergen came out on top from Coulthard and Waters. Bieb’s had his best solo result finishing in 7th and Robbo rewarded the team with another Top 10 in 9th.

I was very, very pleased with the performance of both Bieber and Robbo as neither of them made a mistake in conditions that were very trying and also to our pit crew who under enormous pressure completed the stops like clockwork and although having to double stack twice Robbo kept his cool and worked his way forward.

I am a realist and I am very happy for our team to get a worthwhile result, but it doesn’t change the fact that we all need to continue to work hard, stay positive and stay focused on finding that one-lap speed that is so important in Supercar racing. I know that we will do that!

I can’t wait for Ipswich!