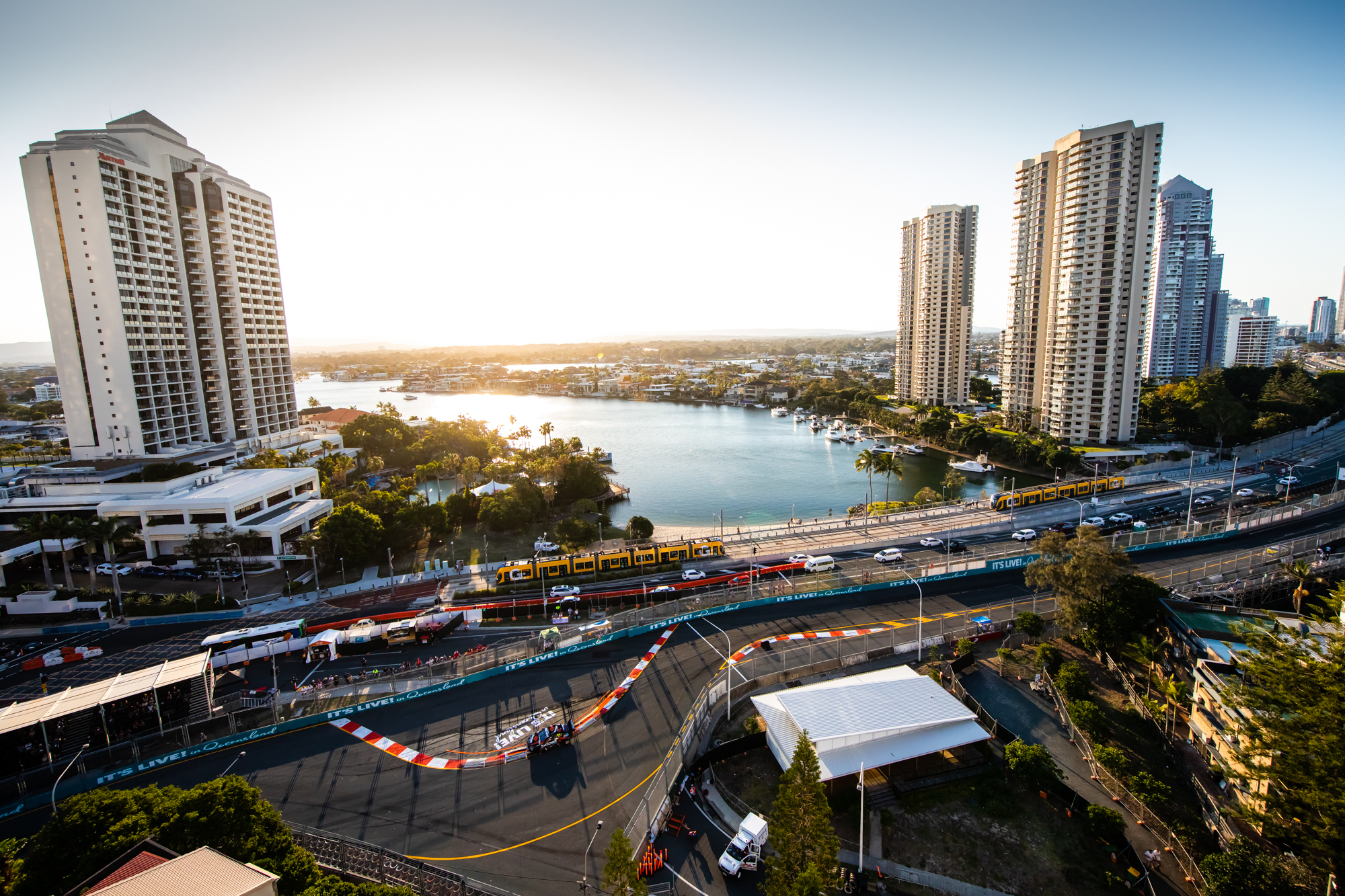 There has certainly been plenty going on since Bathurst, particularly my announcement that we will not be entering Supercars in 2020. Obviously, this was a very difficult decision and although I will miss Supercars and many in pit lane, it is you the fans that I really love and I certainly hope I will continue to see many of you at TCR and S5000 in 2020.

I really enjoy the “razza matazz” of the Gold Coast and I have very fond memories as it is the place where I had my final AUSCAR race. Which I won (I think it was 1994). It’s quite a funny story as I planned on finishing up in 1993, but circumstances led to me going on for one more year. Back in the 90’s the Gold Coast event was incredibly huge with the colour, excitement and glamour of V8 open wheel Indy Cars. My sponsor, Valvoline were a big supporter of this racing and all the “big wig” Yanks would come out for the event known as “Indy”. In 1993 I was racing in the Auscar race and was leading my teammate, Jim Richards. As the race was reaching the final stages, we were really at it and the Valvoline corporate facility just past the start/finish line was packed and people were waving and screaming. I raced across the line just ahead of Jimmy and slowed to wave to the fans and at that instant Jimmy flew straight passed me, there was still one lap to go! I had to settle for 2nd, hence my return in 1994.

Anyway, 25 years later I still have a little chuckle as I reminisce.

Joey left GRM on the Sunday prior to the event and arrived on the Gold Coast on Tuesday. As the event is held in the streets the transporters are not able to take up their usual positions behind the garages as there isn’t a paddock. Part of our crew travel on Wednesday to the GC and they meet Joey in pit lane and unpack the transporter. The transporters are then parked down at The Spit (passed Sea World). Over the years the unpack and organisation has become very streamlined, with spare parts being housed in aluminium containers in an area adjacent to pit entry.

Although the Gold Coast is a great place to visit for the beaches, weather and of course the GC600, one of the main attractions for me is the enormous number of nail/beauty shops. You may wonder why I am interested in such places and it is not the lovely people that work there! It is at 74 years old I cannot reach my toenails and I like to take advantage of the competitive pricing on the Gold Coast to have my toenails taken care of. I don’t want to sound too weird, although I suspect most of you already think that but as there was a Team owners meeting on Thursday afternoon, I thought I should look my best and I had my fingernails manicured also!

At the Team owners meeting Roland spoke and although I do feel a little uncomfortable listening to people speak about me, I was very appreciative of the genuine thoughts of the team owners’ group. Although a little late, Roland did present me with a delightfully mounted and engraved 888 front upright. Thank you! That evening Barry and I caught up with a couple of my old friends at the Main Beach Surf Club. I love these places as they always have the best view and you can normally buy a “pensioners” roast of the day for $9.90. The only let down was the craft beer, c’mon an Aussie surf club surely must have “normal” beer rather than the floral fragrances of the yuppy brew.

Friday and 3×30 minute practice sessions. The GC 600 is 2x300km (102 laps) races over two days. The co-drivers must complete a minimum of 34 laps in each of these races. As per Bathurst Chris Pither and Richard Muscat teamed up with Richie and Bieb’s. In recent years we struggled for outright speed at this track and although we took a completely different direction regarding car setup, we still could not find speed and struggled from the beginning. It really was disappointing that we couldn’t continue the “better” form that we showed only two weeks earlier at Bathurst. The GC track is unique in that the car is really thrown off balance through the chicanes and significant time is lost if a car isn’t quick through these sections of the track.

Qualifying on Saturday and although Bieber improved his gap to the lead cars the #34 was still 7/10ths off the pole set by Chaz Mostert and his Tickford Mustang and qualified 18th and Richie was a further 4/10ths back in 21st. Sadly for Mostert he had a huge impact the concrete wall on the exit of turn 11 in the Top 10 shootout and the #55 was write-off. Scotty Mac continued his dominance of P1 in qualifying and got pole followed by the two 888 cars of Whincup and Van Gisbergen.

The basic numbers that are important for each of the races at the GC600 are the co-driver (and in fact both drivers) must do a minimum of 34 laps, a full tank of fuel will last 43 laps under race conditions and therefore from lap 59 you can make it home to lap 102. The next important number/s is lap 16 to lap 33. If a Safety Car is deployed in this window strategy would mean having to stop and either fill the car or at least put enough fuel to get to lap 59 when a final stop to home could be made and a driver change. In theory, this would result in the co-driver completing more laps than the main driver.

Both Muscat (#34) and Pither (#33) started well picking up positions on the opening laps until lap 21 when Pither and Coulthard (DJR Penske) locked wheels on the exit of turn 11 and the result was a bent steering arm for the #33 and a trip to the garage where several laps were lost and in effect race over. Muscat pressed on and although his stint started strongly several positions were handed back late and he handed the #34 to Bieber in 19th. Bieb’s did what he could and came home 16thh. The 888 cars of Whincup/Lowndes and Van Gisbergan/Tander led the way from McLaughlin/Premat in 3rd.

The repairs required to the cars at the Gold Coast quite often lead to very late nights for the Teams. Street circuits and the related infrastructure used to create them, namely concrete barriers and tyre bundles certainly leave their mark on the cars along with the door handle to door handle racing that these circuits attract.

Saturday night and Barry and I attended a dinner with Volvo Trucks and their customers. These evenings are a highlight for me as I really like listening to the stories from these people and if I were a politician, truckies and those associated with the transport industry would be the first people I would speak to. They are absolutely no bulls*** and their knowledge of what is happening with our economy and the wellbeing of our environment is streets ahead of the best economists and environmentalists.

Thankfully this year we made it to the Volvo trucks dinner as last year Barry led me astray. I am thankful that I have Barry to take me to places and so on, but last year we sat at a bar for two hours waiting for the Volvo Trucks people until we finally got a call asking where we were. Good old Barry had us at the “Peppers Hotel” in Surfers when we should have been in Broadbeach. Anyway, this year we made it to Broadbeach travelling by tram and I had a lot of fun talking to the fans heading home from the races.

Sunday morning and an early morning walk along the beach to check out the wellbeing of Gypsy (GRM – Engine Guru) and his band of GRM warriors body surfing, I was awake with the sleep well and truly flushed from eyes following the site of Gypsy in his “budgie smugglers”.

Breakfast on Sunday is something I always look forward to, as Dom (GRM – Michelin Star Chef, maybe that should be Dunlop Star!) makes the best ham and cheese toasties and I rush to the track so as I can beat the mechanics to the first ones off the grille.

Things did not begin too well for us on Sunday and following Richie overlooking an early morning signing session I chose to stand him down. I have made public comment on this matter already, but all I would like to add is I do understand and want to acknowledge that I am aware that decisions such as this do have an impact on people and in this instance the circumstances would have been very difficult for Richie. I do hope that something positive does result from my action, even if that one small thing is a young person that read/heard of what happened thought “gee, if Garry did this to Richie for forgetting to show for a work commitment then I had better make sure that I am on time at my work”.

Dylan O’Keeffe who drives Super2 for GRM was at the Gold Coast helping ASM (Ash Seeward Motorsport) with Porsche Carrera Cup. I called Dylan less than an hour before qualifying and the race stewards agreed to the change so long as Dylan qualified the car. To Dylan’s credit, keeping in mind that he had never driven a V8 around the streets of the Gold Coast he did a solid job and ran for the 20-minute qualifying session continuously on old tyres just to get a feel for the car.

In the #34 James Golding was looking like making a significant improvement on the previous days qualifying until unfortunately Scott McLaughlin had a major accident exiting the front chicane and tipped his car on its side colliding with the wall on the entry to turn 4. Thankfully after some initial concern Scotty is fine yet would be a non-starter. Bieb’s would have to settle with a disappointing 20th. Following the shootout 888 cars of Van Gisbergen and Whincup were 1-2. The race saw very little change with the 888 cars finishing as they started and Dave Reynolds/Luke Youlden (Erbeus) 3rd. From our point a miserable weekend was topped off with Muscat copping a hit from behind from Canto (BJR) catapulting him into the rear of Steve Richards (Team 18) at turn 11. The impact led to the car limping into the garage and was unable to be repaired in time to complete 75% of race distance and hence deemed a finisher. Dylan did a very solid job and handed the car over to Chris Pither in 18th and from that point nothing changed and the #33 finished 18th.

I must say I was extremely grateful for the well wishes of the fans over the weekend at the Gold Coast. I really enjoy having a chat and a laugh with people and I genuinely appreciate the time people took to come and have a chat and wish us well. Thank you!

Sandown is next, the final round of the Endurance part of our season and I can’t wait!