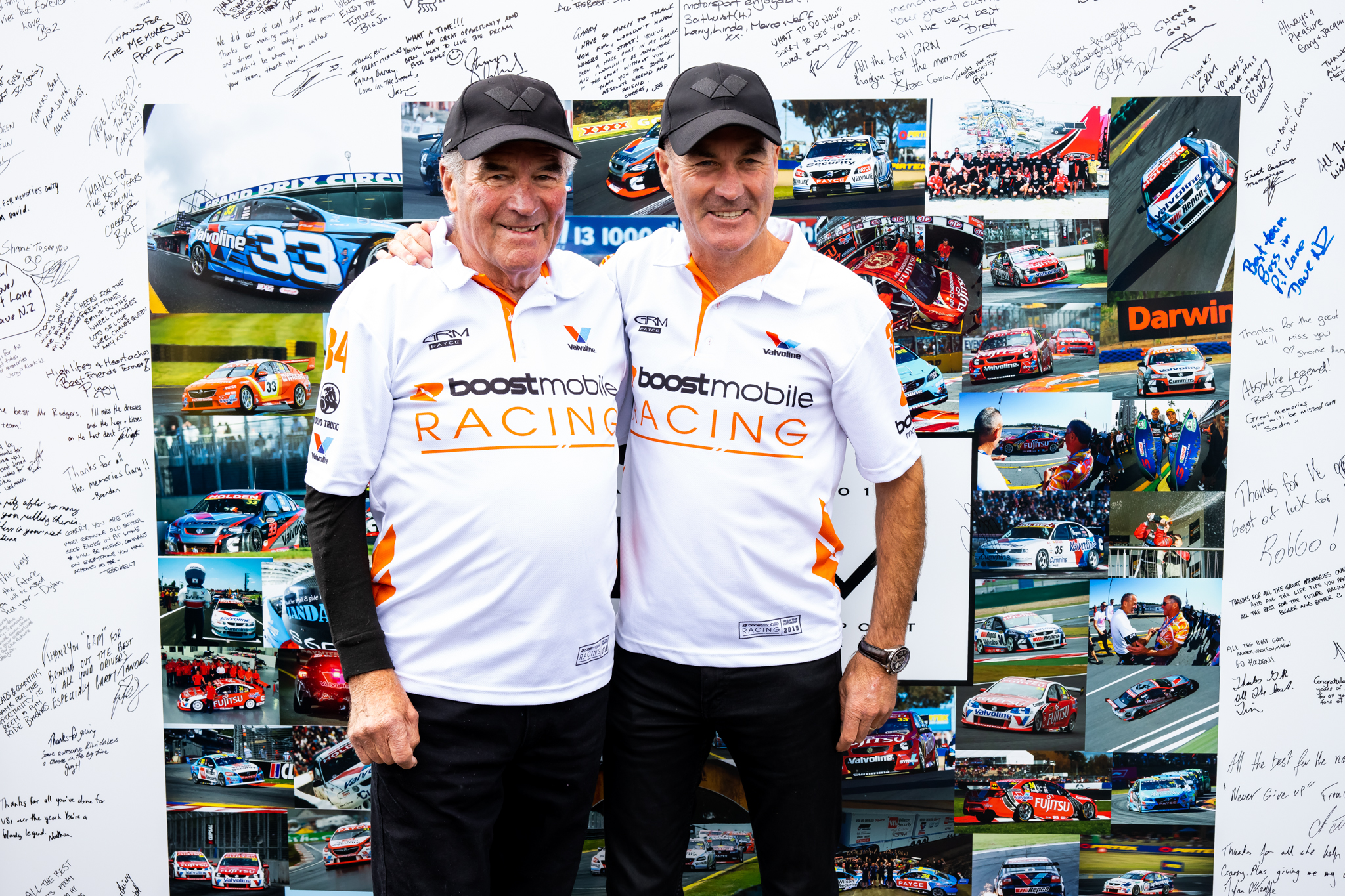 Sandown raceway is a place where personally I have many memories, some of which go back to the 1960’s. Being less than 20 minutes from our workshop it makes everybody at GRM very happy, except one, Joey! Joe would much rather a 4,000km trip across the Nullarbor in the mighty Volvo Globetrotter.

The circuit itself is ideally located 30 kilometres south-east of Melbourne and the three-kilometre layout provides fans with a very good view of the circuit. In recent years there has been murmurings that the Sandown Park facility will be developed into a housing estate. I am certainly a person who supports development and understand the requirement for land and housing to accommodate our increasing population, but I also believe that it is important to preserve assets of significance and Sandown having opened 57 years ago in 1962 has a lot of history and is the last race track in our country located in a metropolitan area. Of course, many locals do not like the noise, but I am also sure that most of them would be aware of the circuits existence when they moved to the area.

When the calendar was released for the 2019 Supercars season, I was pleased to see that the Sandown date was in November as I was certain that this time of year would provide favourable weather. Unfortunately, in recent times my predictions have been a little off target and again this was the case with blizzard like conditions on Friday and Saturday. Personally, the weather doesn’t bother me too much, the worst part is putting up with Dick (Johnson) complaining about the Melbourne weather and continuously informing me of how great Queensland is.

The Sandown 500 is the exact same number of laps as the Bathurst 1000, 161 laps. Each driver must complete a minimum 54 laps and the strategy is to have the co-driver complete their laps first and finish with the primary driver. Following practice on Friday #34 of Golding/Muscat was 5/10ths off the lead time of Reynolds (Erebus) and in 17th and a further 1/10th back was #33 Stanaway/Pither.

Personally, the weekend was very enjoyable but from a sporting perspective it was not so positive. I really enjoy Motor Racing and I have met and will continue to meet some wonderful people. I was delighted to see that the GRM crew had put together a photo board with an image of every model of Supercar GRM have run since 1996 and for many of my past drivers and fans to take the time to come and write a message on it was wonderful. Thank you!

The qualifying format for the Sandown 500 is a rather drawn out contest. It starts with the main drivers taking part in a traditional 20-minute qualifying session where Bieb’s did a tremendous job just 4/10ths off the pole time of McLaughlin and in 10th and Richie was 19th. The qualifying session is then followed by two 20 lap races.

The first has all the co-drivers in the cars and the second the main drivers. Both Richard Muscat (#34) and Chris Pither (#33) picked up positions in the first race finishing 9th and 17th. By the time the second race came about there had been some rain, yet it appeared to be clearing and likely that the track would dry as the 25 Supercars roared around. As it turned out half of the field elected for wet tyres and half dry tyres. On lap 2 of the race there was a light sprinkle of rain and although no further rain fell the air temperature had dropped significantly and the speed and heat of the cars only began to dry the track out in the closing stages. This resulted in “two” races, the slick cars racing each other and the wet tyre cars racing each other. Bieb’s in the #34 came 3rd, but unfortunately that was in the “slick tyre race” and there were 13 other cars on wet tyres ahead. Richie was in a similar position and finished a couple of positions further back from the #34. The eventual race winner and hence pole starter was Jamie Whincup from Andre Heimgartner in the Nissan.

Saturday night and Barry and I took Milenko Vukovic (Renault TCR car builder from Switzerland) out for a beer. Milenko was spending a week with us prior to the Tailem Bend TCR/S5000 round to assist with preparations and to plan for the 2020 season. We had a lot of laughs as we taught Milenko some “Aussie” sayings and listening to his delivery of “G’day mate”.

Endurance races are only that because of the distance they cover, not the speed that they are raced at. Gone are the days of getting into a rhythm and just trying to make it to the finish. Today the speed from the first to the last lap is hectic. The only reason that this may change is due to fuel strategy. The fuel burn at Sandown is approximately 2.6 litres per lap and with a full tank that holds 109litres the maximum stint at normal race speed is 41 laps.

Being 161 laps the opportunity for differing strategies normally unfold. Unfortunately, strategies that are based around anything other than outright speed require outside influences to provide an opportunity for a positive outcome. Apart from the #2 Walkinshaw car of Pye/Luff, where Scott Pye started all other cars had the co-drivers behind the wheel from the start aiming to complete the compulsory 54 laps. As the race settled the #34 and #33 followed each other mid-pack. Pit stops began on lap 16 as cars tried to get out of sequence with the field. We pitted Muscat on lap 17 and ran Pither to lap 27. On lap 31 the Safety Car was deployed, and we stopped Muscat and Pither on consecutive laps to brim the tank and aim to get home in 2 stops from this point. To make it home from lap 33 would require stints of 43 laps and to get an extra two laps out of a tank requires fuel saving. When this strategy is being considered many things are taken into account particularly the laps remaining. For a successful fuel saving strategy to unfold it does rely in part on future Safety Cars, but with 128 laps remaining the chance is high of that occurring.

Unfortunately, the race ran without incident and the implementation of a fuel saving strategy on a 3km racetrack with no SC periods led to being lapped. Richie came home 14th and Bieber was struck with a driveline failure with only 3 laps to go that saw him stranded.

Out front the 888 cars of VanGisbergen/Tander and Whincup/Lowndes dominated and after a brilliant drive by Garth in the #97 coming from the back row to the lead in the co-driver stint the #97 broke a rear suspension component with only a handful of laps remaining handing the win to Whincup.

Although this was my last Sandown 500 and the result for GRM was not what was hoped I did have a smile as Whincup (and Lowndes), Moffat (and Mostert) and Holdsworth (and Randle) all ex GRM drivers stood on the podium. Well done to all!

One round to go, I can’t wait for Newcastle!

MOMENT OF DISAPPOINTMENT – from Joe’s perspective, driving to Sandown

MOMENT OF EXCITEMENT – from my perspective, signing off on the petty cash voucher for the fuel and service station food required to get Joe to Sandown