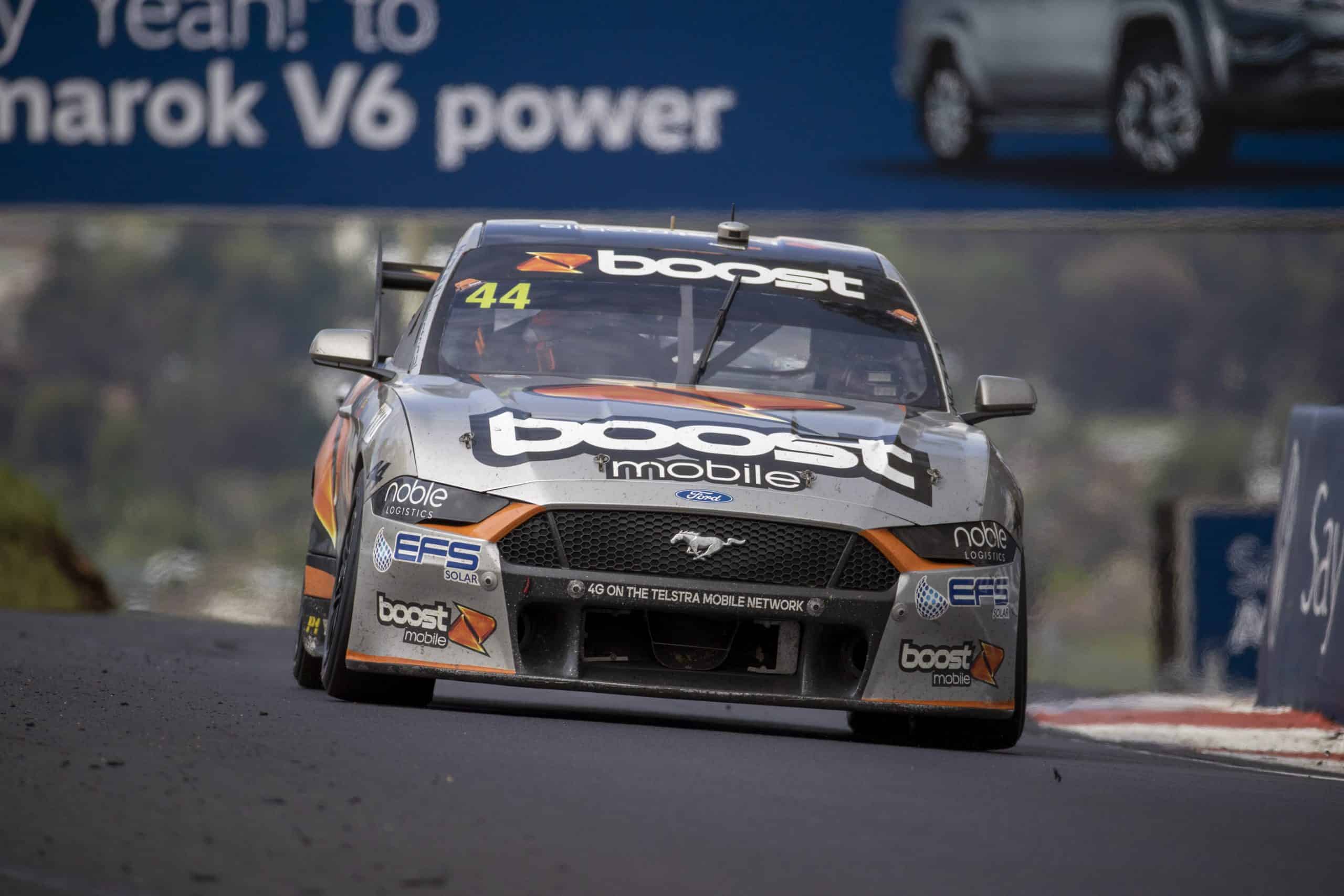 It all started out with a promising first day for the Boost Mobile Racing pair of James Courtney and Broc Feeney (No. 44 Boost Mobile Ford Mustang), with Courtney placing third and ninth in Practices 1 and 3, and main game debutant Feeney placing 15th in the co-driver session, as the 17-year old continues to build his confidence behind the wheel of the No. 44 Mustang.

“It was a pretty good day overall. We made progress with the car, Broc did a great job getting comfortable, we had reasonable speed, and we know where we’re lacking speed, so a pretty good first day. We had a minor electrical drama at the end of the last session which probably didn’t help me get the most out of the lap, but I’m pretty comfortable with where we are, and yeah, looking forward to going again tomorrow.” James Courtney.

The promising start continued on Friday with James Courtney (No. 44 Boost Mobile Ford Mustang) guiding the No. 44 Mustang to ninth by the conclusion of qualifying, ensuring a spot in the top 10 shoot out and that he and teenage co-driver Broc Feeney will start near the pointy end of the grid on Sunday.

“It was good to make the Shootout, not by much but we’re in and that’s all that matters. The team’s doing a great job, the car overall feels quite good, Broc’s getting good mileage and laps under his belt and driving real maturely, so far so good. We’re chasing some little things and have had some minor hiccups, but we’re happy with the results we’ve had and I’m looking forward to tomorrow.” James Courtney.

A day after qualifying ninth in Friday’s group qualifying, James Courtney (No. 44 Boost Mobile Ford Mustang) posted the eighth fastest lap in the Saturday Shootout, citing a balance that didn’t “hook up” as he had hoped in the overcast and cool conditions on Mount Panorama.

“Eighth was okay for us. Obviously when you go early in the Shootout you want to move up, but we struggled to unlock the one-lap speed in the Shootout so I couldn’t do much with it. On the positive side I’m pretty happy with our race car, Broc had a great co-driver session as well, so I’m confident we’re thereabouts, which is all you can ask for heading into this race. We’ll wind it up tomorrow and see what the Mountain has in store for us.” James Courtney.

“That was a lot of hard work for tenth. The Boost Mobile Mustang was pretty solid today but not quite as quick as we needed to get to the front. The team did a great job, Broc was fantastic – it’s hard to believe he only turned 18 today, he didn’t put a wheel wrong – it’s always good to be in the 10, but it’s Bathurst and you’re never happy unless you’re first. It wasn’t our day, but really proud of the Boost Mobile Racing team for the work they’ve put in this week, and all year.” James Courtney.

Tickford Racing concluded the 2020 Virgin Australia Supercars Championship with its two garages claiming third and fourth positions in the teams’ championship, marking the fourth consecutive season the team has earned third place honours. On Monday the team’s traveling staff will head back to Melbourne for the first time since early July, ending a 105-day road trip that included eight race rounds in four states and territories, as well as a temporary base at Sea World on the Gold Coast.