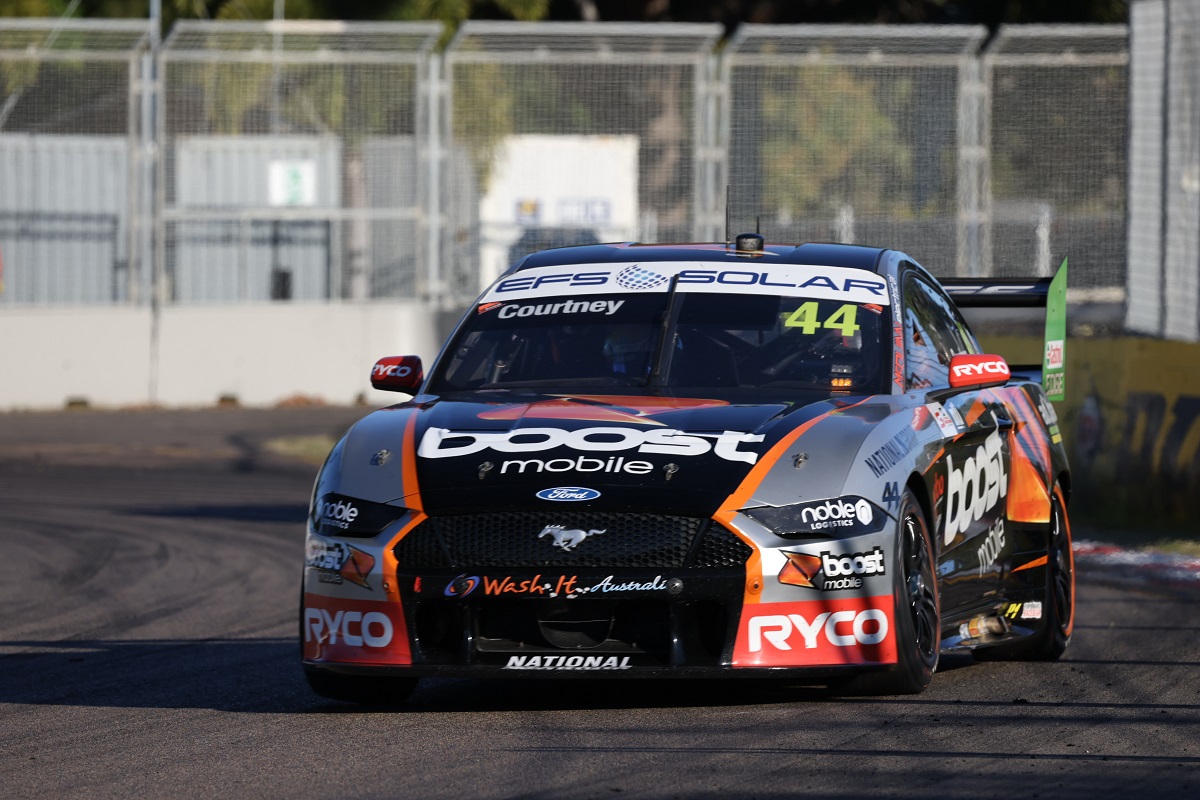 The duo were split by stable mate Jack Le Brocq (No. 5 Truck Assist Ford Mustang) following the Top Ten Shootout, with all three Tickford drivers qualifying in the first five rows. Le Brocq was unfortunately dealt minor damage from contact on the first lap which he then had to nurse for all 87 laps of the Saturday afternoon race, ultimately finishing 15th at the chequered flag.

Sunday offers a new day and a second 250-kilometre race on the streets of Townsville. On-track action at the NTI Townsville 500 resumes Sunday with Race 16 qualifying beginning at 10:15 a.m. AEST, followed by another Top Ten Shootout at 12:05 p.m. The 88-lap Race 16 begins at 2:45 p.m. to conclude the NTI Townsville 500.

No. 44 Boost Mobile Ford Mustang
James Courtney
Race 15 Quali: 1m12.50s, 7th
Top Ten Shootout: 1m12.83s, 6th
Race 15 Finish: 7th
“Today was okay for us, I thought I was looking after my tyres quite well but we experienced massive tyre deg on the Boost Mobile Mustang. We managed to come home seventh which was decent for points, and it was nice to run at the front for a bit in third spot and have some good battles. We’ll tune the car up tonight and hopefully make it a bit nicer on its tyres, then go again tomorrow and see how well we did on our homework.”

On his race start and launch to third: “The start was mega. I got off the line really well, and as we all got down to Turn 2 I was waiting and waiting for someone to block, but no one ever did so I just slid on through. It felt pretty cool and set us up quite nicely in that first stint, it’s just a shame we couldn’t put it all together and chase a trophy today.”

Tickford Racing concluded a challenging NTI Townsville 500 with a reasonable result on Sunday, where all three of its Ford Mustangs finished in the top 11 of Race 16. The team was led by Cam Waters (No. 6 Monster Energy Ford Mustang) who started and finished sixth in Sunday’s 250-kilometre race, retaining fifth in the Supercars drivers’ championship.

Waters’ team mates Jack Le Brocq (No. 5 Truck Assist Ford Mustang) and James Courtney (No. 44 Boost Mobile Ford Mustang) finished the day 10th and 11th, respectively, making solid recoveries from their starting spots of 15th and 17th. Courtney’s drive to 11th was interrupted by a tangle with Car 20 on the opening lap, dropping the 2010 champion to as low as 23rd before driving through the field across the remaining 87 laps of the race.

The Supercars Championship will stay put in Townsville this week in preparation for the Townsville SuperSprint on the July 17-18 weekend. Following this weekend’s Super500 format, the second Townsville event will feature the three-race SuperSprint format seen at the majority of events thus far in 2021.

No. 44 Boost Mobile Ford Mustang
James Courtney
Race 16 Quali: 1m12.63s, 17th
Top Ten Shootout: n/a
Race 16 Finish: 11th
“After the way things started, 11th wasn’t too bad a result, really. The car pace was pretty good, strategy was good, it held onto its tyres okay, it’s a bit unfortunate we had such a solid run only to finish where we did. But if we qualified better we probably stay out of that trouble and could have had something to write home about. It wasn’t a bad weekend for the Boost Mobile Racing boys, but we certainly want more, so we’ll have a think this week and come back looking for a better run next weekend.”

On Lap 1 incident: “It’s a bit crazy, getting a great start yesterday up to third and today getting dumped down to the back. It was just a whole concertina effect going into Turn 11, everyone was piling into each other, I got into someone and someone got into me. That sort of thing happens when you start down there, so qualifying better will help solve that problem.”